I am a great believer that if you know how a system is structured you will be able to predict how it performs in different environmental conditions.

As the chart below indicates there has been a fundamental shift in who owns shares in the USA over the last 50 years.

Prior to the start of financial deregulation – which really started with the removal of the constraints of the gold standard in 1971 -shares were predominantly owned by individuals. 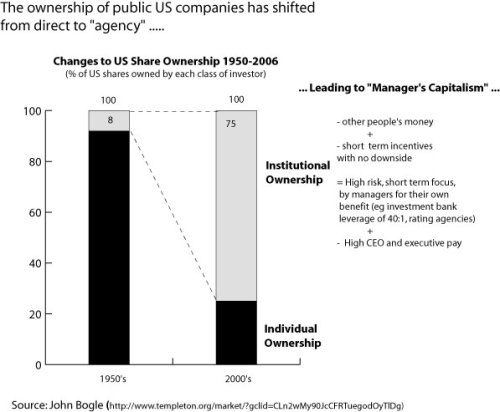 The majority of shares are now owned by institutions who hold them on behalf on individuals. These institutions compete with each other to deliver the highest returns. Performance is measured by the quarter and Funds managers are similarly rewarded for short term performance – but with zero claw back of performance pay if performance subsequently declines.

This leads to herd like behaviour by the institutional funds managers. If the market starts going up – like right now in December 2009 – they need to be in the rising market otherwise they will be left behind in the performance tables.

It does not matter if these funds managers know that the markets are overvalued and likely to collapse some time soon. If and when the markets collapse they will once again be able to claim deniability – “we couldn’t see it coming” will be the cry. Fund managers will point to the fact that all the other funds were doing the same – how can they be blamed for not seeing when they are doing the same as everyone else. There is safety in the herd.

If you want to know where high CEO pay came from, part of the answer lies in institutional share ownership.

As for the gambling behaviour of the Banks – this too took a jump when Investment banks shifted from partnership to public ownership. Who in their right mind would risk leveraging 40:1 with their own money?

And right now the situation is even worse. Banks like Goldmans are reporting big profits but these are coming only from trading. The same pattern is in the other banks. The only place they are making money is by high frequency trading – leveraged trading using other peoples money. This in itself is driving up the share market.

And when the markets crash and the banks suddenly look sick again it will be high street on the hook again to bail them out. They have now become too big to fail and they know it. They can do anything they want and get away with it.

And this is supposed to be Democracy.