Diminishing Marginal Returns and Societal Collapse – How close is the USA to the tipping point? 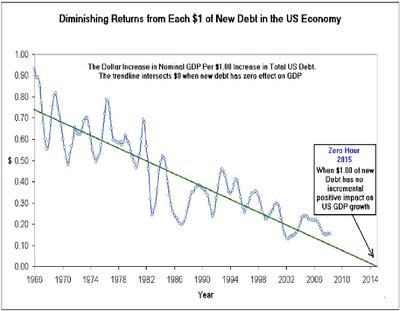 Yesterday I came across this chart . I am assuming it is using the correct data but I haven’t checked. If the data and the trend line are correct we should be very worried – very very worried. Why?

This chart is measuring the economic return from new investment in the USA. It is suggesting that there is a trend of diminishing marginal returns. The latest data suggests that for every dollar of new debt there is only 20 cents of economic growth and this could hit zero by 2014. A resurgence of the oil price could speed this process up.

Why we should be concerned with this is that Joseph Tainter, author of The Collapse of Complex Societies, discovered that the common cause behind the collapse of 24 societies that he studied was “diminishing marginal returns”.

The story of human progress is a story of our increased capacity to harness and use energy – our modern western lifestyle requires nearly four times the amount of energy per person to maintain than it did 100 years ago. This has only been possible because of cheap oil and this will not last forever. 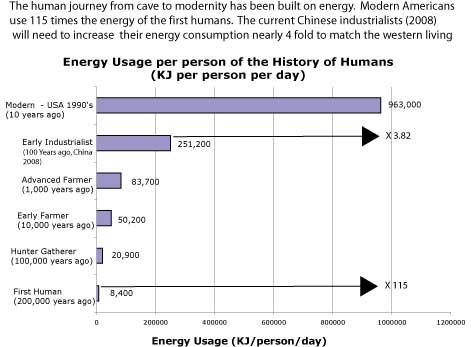 Moreover, the infrastructure and economy of the USA has been built on the basis of cheap oil and cheap transport. This has left the US economy with very poor resilience.

Tainter’s study showed that as societies become more complex they create problems that they try to solve by adding greater layers of bureaucracy. This complexity costs energy. All around the world we see governments growing larger and consuming a greater proportion of GDP. Even the Republican party – the party of small government – has increased quickly under George Bush. And the latest round of bailouts are a further example of the added costs of government costing more money to try to solve problems brought about by the complexity of financial derivatives.

Tainter is not the only historian to suggest diminishing marginal returns lead to societal collapse. Thomas Homer-Dixon has suggested that societal collapse occurs when the Energy return on Energy Invested, or EROEI, approaches 1:1. When EROEI falls below 1:1 it takes more than one unit of energy to harvest one unit of energy and collapse occurs – in today’s world energy and money are equivalents.

Tainter describes collapse occuring by one or more of 3 models

By his definition we fit the Runaway Train model as a society that only functions when growth is present. We are a suicide machine and capitalism is a runaway train. Look at how China is responding to a fall in economic growth from 11.9% to a projected 8% – it has committed over $600B to re-stimulate demand. Even at a growth rate of 11.9% China is only generating 12 million new jobs a year. It needs to generate 24 million new jobs p.a. just to keep unemployment at 25%. So even at this rate unemployment is increasing at the same time as inequality is increasing. (Source Asian Development Bank).

In his recent book, The writing on the Wall China and the West in the 21st Century, Will Hutton quotes that China is destroying it’s arable land at the rate of 5% p.a. This seems unbelievable to me and I have not been able to find a source to confirm it. You don’t have to be very good at maths to work out that at this rate of destruction there would be no arable land left in 20 years.

And for those people who suggest that technology will come along and solve the problem, I have two questions. What money will we use and who will invest if the environment is unstable? History has shown that innovation only occurs in stable environments. The human race is rapidly losing its resilience. Democracy is an unaffordable system for the whole planet. It has only appeared succesfull because we measure success in the short term and its benefits have been confined to a few.

The history of human civilisation could easily be simplified into two parts – pre and post industrial revolution. In almost any chart you look at that has anything to humans over the last 50,000 we inevitably see the same “profile” – the classic hockey stick shape with exponential growth in the last few hundred years. 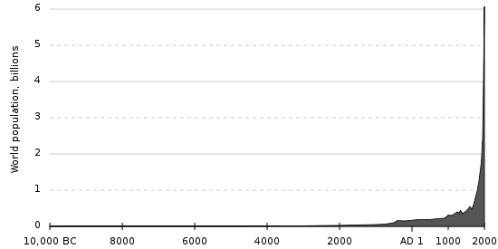 Pre-industrial life has been called a Malthusian trap. Any extra energy that was captured by human’s ended up as extra population rather than as an investment in technology and an increase in average per capita energy usage. I heard the historian Niall Ferguson describe this period as largely a story of subsistence farmers dominated by a few elites. My opinion is that this is an over simplification but the point is that there is an equilibrium between energy harnessed by humans and energy used by humans and this is especially the case in populations that did not posses the technology to store food surpluses.

Modern technology has not only given us the capacity to store food surpluses but it has also given us the capacity to increase the “energy yield” for a given area of land. This has allowed us to increase the carrying capacity of the land. But how sustainable is this? What would happen if energy became more expensive? How much of technology is really only a way of “stealing our future” dresses up as “progress”.

Take the example of Australia. Before the arrival of white settlers Australia was home to between 700,000 and 900,000 Aborigines. Given that they had been here for at least 50,000 years it is probably safe to assume that this was the equilibrium population level for their level of technology. Compare this to the current population of approximately 23 million where Australia is a net food exporter.

But look at bit deeper and you will discover that this has come at a cost. As a result of “modern” farming methods least 25% of the original agricultural land has been turned into desert or has such a high salt content in it that it can’t be used for agriculture. Aquifers have been pumped dry and the water for the major farming area is over allocated. The food production and distribution system is totally dependant on fossil fuels for fertilisers and mechanisation. But fossil fuels are set to run out and will become more expensive before they do.

Anyone who looks at these facts and denies that we have “stolen from our future” and destroyed our capital to get where we are is in denial.  And what is our response? To look for further economic growth and population increase. This is insanity.

One response to “Diminishing Marginal Returns and Societal Collapse – How close is the USA to the tipping point?”